The Science of Happiness: Fairness and Acting Humanely

In our new series on The Science of Happiness, we’re exploring The Five Ways to Happiness at Work with creators Nic Marks and Dr. Jody Aked.

Be Fair is the second of The Five Ways and sets the foundation for a successful wellbeing plan. Nic and Jody tell us why. 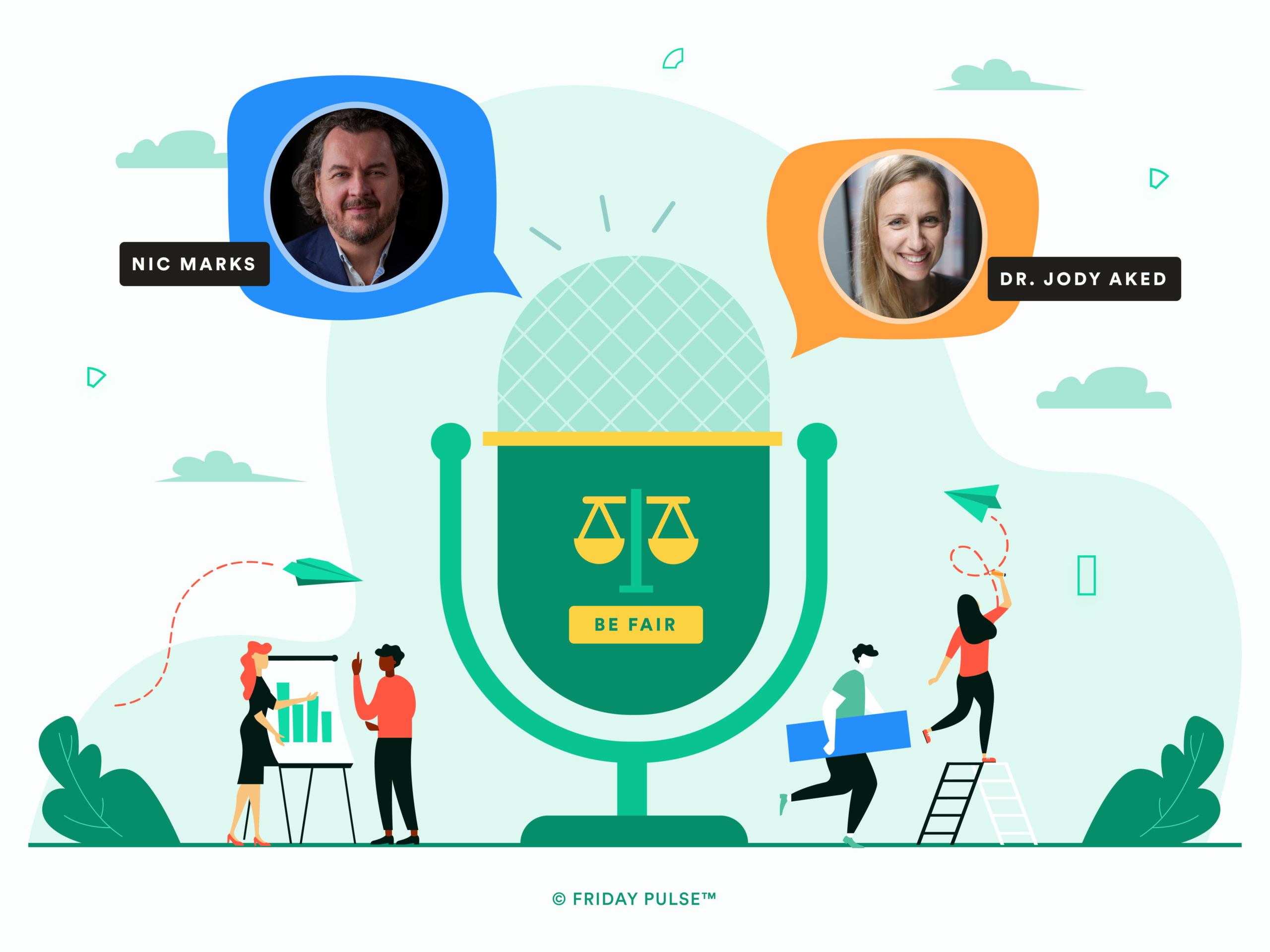 Friday Pulse: “There is no wellness without fairness.” Nic, you’ve shared this quote from Isaac Prillenltensky as one of your favorites.

Absolutely, but I think we can adapt it to “There’s no happiness without fairness.”

Be Fair is being renegotiated now in the workplace from lots of different angles. It’s in the discussions about hybrid working and what that means for team dynamics. It’s also in Black Lives Matter and those conversations around whiteness and white privilege. We are in a fascinating moment of reckoning over equality and fairness in society.

Inclusivity is also becoming ever more prevalent because it’s not just for the individual. People are looking at how it can inspire innovation and creativity within the team — diversity in its truest sense. If you get different perspectives and insights, you ultimately design better products and services.

Why is Be Fair so foundational to happiness?

I often think about it with children. If they don’t have that fundamental sense of safety and that everything’s okay, then it’s hard for them to explore and put themselves in positions where they can have positive, life-enhancing experiences. It’s no different with work.

But in the workplace, if you don’t have the basics in check such as working hours, fair pay or ethics, quite quickly, things run away with you. Fairness is not the kind of stuff that’s going to make you come out singing and dancing. But it’s that kind of contentedness, everything in its right place. Be Fair is a sense of, “This all feels like I’m respected. I respect other people. I’m going to be treated well here.”

Be Fair is not flashy in the same way as the other Five Ways. In some respect, it’s a deficit need. When it’s not met, you don’t get into a space of dynamic happiness or positivity. It doesn’t have much of an immediate upside. So, things like fair pay, work-life balance — if they’re wrong — can be a big problem. But when they’re right, they act as the foundation for everything else.

There’s quite a lot of reciprocity in Be Fair. It’s about feeling respected and respecting others. It’s not a one-way street. What appreciation am I showing others as well? When we’re coaching team leaders, and we find that people are feeling underappreciated, then we often add, “What have you done to appreciate yourself this week?”. This is important to recognize.

What are some good ways to appreciate yourself?

Each week, we ask teams to share their successes — this is not just to inspire people but to recognize effort. Writing down a success makes you stop and take inventory of the good things you and your team have achieved.

You can also appreciate yourself by respecting that you have a life outside of work and that you also have work to do.

Work-life balance and boundaries is a topic that’s often discussed, especially during the pandemic. What kind of advice do you have for people in drawing their boundaries?

We coach a lot of organizations that have a number of highly engaged, motivated people who are struggling with a work-life balance. So, we like to ask, “What have you done to draw the boundaries as an individual?”

Nic:
Burnout comes from overworking, and it often comes from highly engaged people who go the extra mile. When burnout strikes, what can happen is you’ll suddenly lose an employee for three months because they go off sick or, worse, eventually leave. So, you have flight risk and you have a health risk.

Yet, before burnout people’s productivity disappears, even though they’re at work. They might be working long hours, but they’re not necessarily delivering. This falls on the enlightened employer to make sure all employees have a good work-life balance. It really pays to have your people work less!

What do you see as some of the biggest problems with fairness in today’s workplaces?

Many companies adopt a one-size-fits-all policy. That’s wrong. One size doesn’t fit all. Personalization can be an opportunity for more fairness. A lot of fairness policies are made without any consideration of power symmetries. Power is inherent in any relationship. And you need to understand where the power asymmetries may surface from a hybrid model of working and talk about them. I often think about how often we design for introverts and ambiverts as well as extroverts in the workplace. The structure probably looks quite different. We tend to design for extroverts.

In hybrid working, those who are naturally outgoing may find it easier to both make and sustain connections with people on screen, as well as face-to-face. How do we not unintentionally edge people out in the way that we hold meetings — especially when we host meetings and we’ve got some people in the office and some people out?

This is why we track data points, and we give numbers to concepts or experiences that can then be talked around. So, whether it’s appreciation or work-life balance, we give it a score — the question then becomes, what does that look like? What does good look like? From there, you can then start unpacking it to get everyone on the same page. Then, you can look at how this applies on an individual level. Who is having a hard time? Who isn’t?

Is there an overlap between Be Fair and Connect? It seems like you can’t have fairness without connection.

I think it’s hard to be fair without connecting, yes. Otherwise, you’re making assumptions. You’re having many conversations in your head about what that person’s experience is or how they feel. And we layer a lot of unconscious bias onto that.

The truth is that we make fundamental attribution errors all the time. We think that people are just handed success. But if I know you and I understand your journey, your trials and tribulations, your little successes and wins – if I know all that, then I can’t help but be happy for you.

Through connecting, we humanize one another, and that makes it easier to be fair.

They explored this topic and found that you need quite a lot of women on a team to build up emotional intelligence because this is something women are naturally strong at. What stood out was that if you wanted full participation from women, you need a team with more women than men (above 50%). The team composition usually doesn’t stop men from participating, but it has an impact on women.

What can teams do to create a fairer environment?

Nic:
**In some ways, it’s quite simple. I think it’s listening to people and approaching things with a fairness lens. I like the idea of “Thinking before you think.” It’s a reflection before you do something. You have to ask yourself the question, “Is this procedure fair? Are there any biases in it?” If you keep asking yourself that question, by taking stock and reflecting, you’ll be able to remove 70-80% of unfairness.**

In a more direct way, it starts with getting good data that you can act on. This is especially true with things like the gender pay gap. You may not think you have a problem, but data can show where inequalities exist in your company.

There are a lot of things that are in the teams in control. Hiring for diversity is one thing. Making sure airtime is shared evenly in team meetings is another.

And that’s it, really. At the end of the day, are we treating people humanely?

Filled under: happiness at work 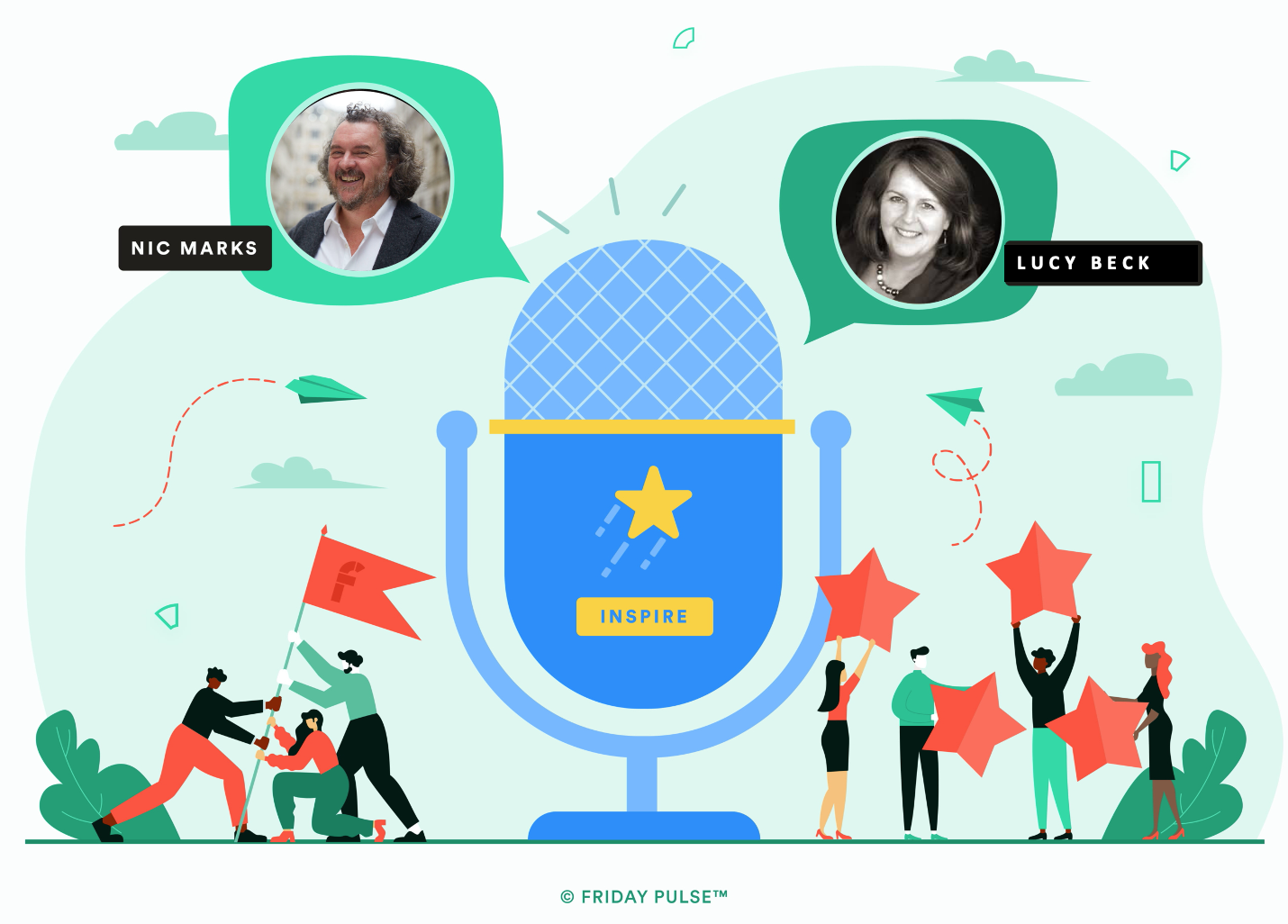 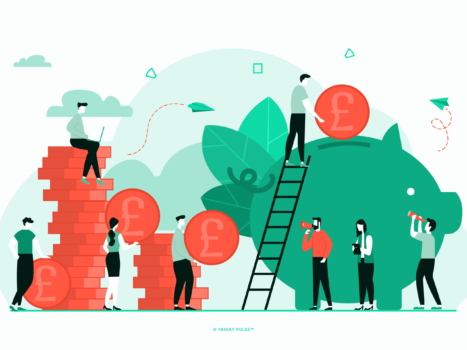 How a Weekly Team Meeting Can Generate a 5x ROI

Returns on investment have never been more critical as recession is looming. Yet, if we were to offer you a 5X return on investment – in Year One – you would certainly not believe us. There has to be a catch, right?